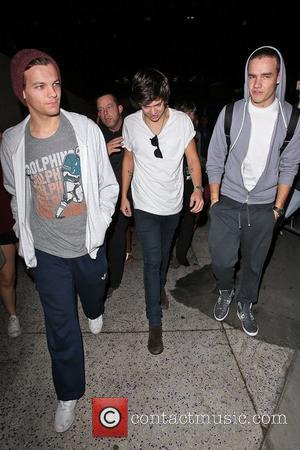 Harry Styles' might want to book his tattoo appointments for times that fit his schedule, as walking around with unfinished ink is just not cool, especially when it looks like he's got 'Things I C***' written on his arm.

The One Directioner was papped landing in L.A with his One Direction cronies, and some eagle eyed cameraman got a nifty close up of his latest - and unfinished - ink, and is it just us or does it contain a rather unsavoury profanity? Most outlets say the ink reads 'Things I can' and 'Things I can't' on Hazza's left and right forearm. But the latter looks suspiciously like the C-word. You need to get those tats finished before you show them off Harry; can't and c*** are too similar! During an appearance on Irish chat show, The Late Late Show, Harry revealed that he had been to the tattoo parlour that same day but refused to show them off as they were still bandaged up. He also declined to say what the tattoos actually meant, but his band mate Nial Horan quickly said: "It's a London thing," the Daily Mail reported.

The Ex-X-factor boys are in Los Angeles to perform on the U.S version of the show that made them famous. They're also set to meet up with Ellen DeGeneres on her show before Harry comes back to Dublin to get that tattoo finished up!