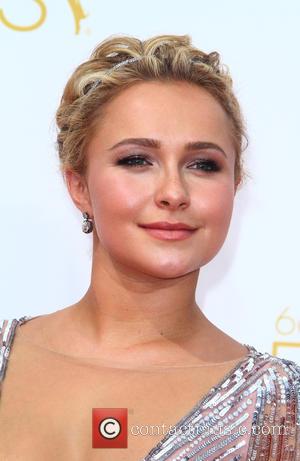 The couple welcomed Kaya in December (14) and the family spent the summer (15) travelling across Europe.

The trip included a stop in Klitschko's hometown to introduce the child to the sportsman's extended relatives, and Hayden reveals they decided to give little Kaya a traditional Ukrainian baptism.

"I had such a great vacation," she said. "We got to go down to France and Germany and we spent some time in Ukraine. Kaya got the chance to get introduced into (sic) her other native country. We did her baptism there and that was one of the most incredible parts (of the trip)."

Hayden reveals Kaya wasn't too impressed with the Christian ceremony and cried throughout, before attacking the priest.

"This kid loves water and... she's never cried anytime we put her in the shower or the bath or the ocean," Hayden explained. "She loves swimming, and of course, the one time that we need her to not cry is (when) the priest (is) dipping her into the holy water and this kid is just wailing. There's just these beautiful pictures and everyone's all dolled up and our heads are covered and she's, like, (screaming).

"The priest at one point takes a little bit of her hair and cuts it - it's part of the (local) tradition - and she was like, 'Honey, you take my hair, I take yours' and she took his beard and just like, 'Yank...!' She's a fighter."

Hayden became engaged to Wladimir in 2013 after dating on and off for four years, and they have previously insisted they are in no rush to wed.

However, she has suggested a ceremony has already taken place after referring to Wladimir as her "husband" during the interview on America's Live with Kelly and Michael on Monday (28Sep15).

Discussing Kaya's baptism incident, she quipped, "My husband still has the beard hair!", but her use of the term was overlooked by the show's hosts.

She went on to detail her dreams for a large family and confessed Wladimir would love to experience the feeling of carrying a child himself - if only the science was available.

"When I was pregnant, he would do this thing where he would suck in his stomach and then I would put my stomach to his so he could feel when she was moving, almost like she was in his stomach," Hayden said. "He wanted to feel what it was like for him to have the baby as close to him as it was to me."

Worrying she had said something to embarrass the boxing star, she added, "He's gonna be like, 'I can't believe you told them! What? You told them I wanna get pregnant?'"