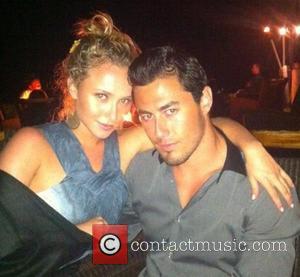 Picture: Hayden Panettiere posted this picture on Twitter with the caption 'Amazing dinner at Merriman's!'

22-year-old blonde bombshell and Heroes actress Hayden Panettiere took a new approach to playing tennis as she served up rounds whilst dressed only in a tiny chocolate brown bikini. The star, who is currently holidaying in Hawaii with her latest piece of arm candy; NFL star Scotty MCKnight, then preceded to play a game of basketball in the same unusual attire. We doubt her boyfriend, nor any passers by, had too much to complain about though as the star looked stunning in what was clearly no PE kit.
As reported by The Sun newspaper, the star was clearly enjoying her romantic retreat on the Pacific Island, tweeting "Lovin' Hawaii with my man." The actress, who is a keen animal rights activist, was on the tropical island on behalf of the Pacific Whale Foundation, but took a well earned break with her beau to get back to normality for a while and enjoy the Hawaiian sun.
The actress has previously dated boxer Wladimir Klitschko, British television presenter Steve Jones and fellow Heroes actor Milo Ventimiglia and clearly is not one to get hung up on past flames as she reportedly looked loved up, if not a little competitive, with MCKnight.