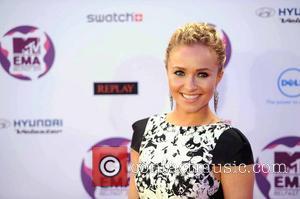 Hayden Panettiere is set to show off her singing skills playing a country superstar in new TV soap Nashville.
The actress, who played a cheerleader in sci-fi show Heroes, will swap her pom-poms for a microphone for her lead role in the upcoming drama set in the Nashville, Tennessee music scene.
Panettiere's character Juliette Barnes will be forced to tour with a fading veteran singer in order to revive her flagging career.
Confirming the news in a Twitter.com post, Panettiere writes, "I'm thrilled to announce I'm doing the new ABC show Nashville! I can't express how humbled and thrilled I am to be a part of this!"
Jonathan Jackson has also been cast in Nashville, written by Thelma & Louise screenwriter Callie Khouri.