Heidi Klum dressed as a wrinkly old woman for her Halloween party at the Marquee nightclub in New York City last night (31.10.13), and her detailed outfit included latex skin and prosthetics to give her skin an aged appearance. 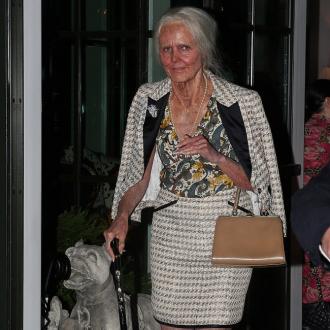 Heidi Klum dressed as a wrinkled old woman for her Halloween party.

The 40-year-old catwalk beauty hosted her 14th annual bash to celebrate the spooky holiday last night (31.10.13) at the Marquee nightclub in New York City where she arrived in a vintage Rolls-Royce Phantom II limousine and stepped out to show off her incredible transformation from supermodel to elderly lady.

The 'Project Runaway' host wore a pearl necklace, a suit skirt and blazer and latex skin, prosthetic effects and make-up remarkably added age spots and raised veins in her legs to give her skin an aged appearance.

She also covered her luscious blonde locks with a white wig.

Heidi made a series of posts on her Twitter account to her 1.9 million followers showing her outfit being applied, she tweeted: ''Ok guys........I am going into the future (sic)''

Heidi was styled by award-winning make-up artists Bill Corso and Mike Marino in addition to make-up effects artist Andy Clement, and she thanked him for his help as she removed parts of her costume after the bash.

She wrote: ''Thanks to Andy Clement and #creativeCharacterEngineering for my amazing prosthetics (sic)''

Heidi has been planning her outfit since July when she posted an image of her face covered in a plaster cast on Twitter, and captioned the post: ''Started working on my Halloween costume! #HeidisHalloween. (sic)''

The 'America's Got Talent' judge is nicknamed the 'Queen of Halloween' because of her commitment to the holiday and she always puts in the extra effort to create an extravagant costume.

Last year, she dressed as Cleopatra, donning an extravagant gold headpiece, at her party, which had to be postponed due to Hurricane Sandy which hit NYC.

Two years ago the model was late to her own party as she was busy having custom hair applied to her ape costume which she attended with estranged husband Seal, who she split from in January 2012.

She wore a red transformers-style robot costume with her face painted purple for Halloween in 2010.