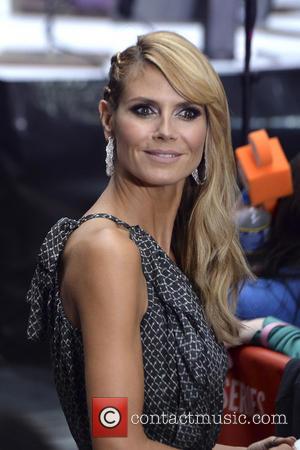 Supermodel Heidi Klum was honoured with the Crystal Cross Award from the American Red Cross for her charity efforts during a ceremony on Saturday (17May14).

The model-turned-Tv personality has been working with the relief organisation for the past 10 years, but it was her work after Hurricane Sandy hit the U.S. East Coast in 2012 that earned her the special recognition.

Thousands were left homeless or without power for days when heavy winds and rain battered the area, and Klum offered up items from her Truly Scrumptious line of baby and toddler clothing and nursery decor to help those in need.

At the ceremony at the French Embassy in Washington, D.C., Klum told People magazine, "I try to give back. After Sandy, we got a gigantic truck and we loaded it with blankets, diapers, kids' clothes and toys because it was right around the holiday season and we went to Long Island (New York).

"So many people had lost everything, and everything was wet and it was a big mess. The Red Cross has such an infrastructure to help you, you need all these hands."

She adds, "I try to get a lot of goodies from the people I work with. I realize how fortunate I am. When you go out into these desperate situations, when you sit at a hospital with sick children, of course it changes you. We are used to seeing horrifying catastrophes on television, but when you are about to go and be there and see the sadness on people's faces and the things they just lost, it makes a huge difference."