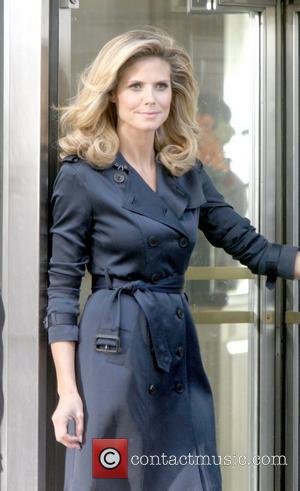 Picture: Heidi Klum filming on the set of a commercial for a German hair care product called Belladonna outside the Flatiron building in Manhattan. New...

Supermodel Heidi Klum has dismissed ongoing reports suggesting she's dating the creative director of her hit European TV show Germany's Next Topmodel.
The stunner has rarely spoken about personal matters since separating from husband Seal at the beginning of the year (12), but now she's clearing up rumours she has found a new man in TV sidekick Thomas Hayo.
The couple was photographed getting cosy on the set of the show this spring (12), but Klum insists she and Hayo are just good friends.
She tells German newspaper Bild am Sonntag, "He is not, nor was he ever my boyfriend. I think he is a great guy, but not for me."
And, following the failure of her second marriage, Klum tells the publication she has no plans to wed again, even though she enjoyed being Seal's wife.
She is quoted as saying, "I really enjoyed being married... I loved our annual fairytale weddings that were our big family parties. But sadly, it somehow didn't work out."
And the U.S. Project Runway host insists she's optimistic about the future, despite her split.
She adds, "I look into the future, concentrate on my family and I have to say that I'm happy. There are worse things in life than a separation."