Heidi Klum's children gave her four painted moulds of their hands for her 40th birthday on Saturday (01.06.13). 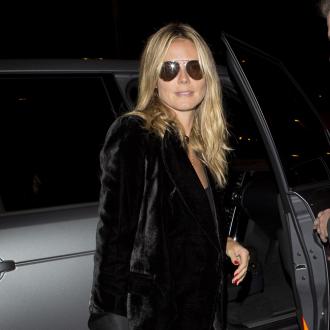 Heidi Klum's children gave her four painted moulds of their hands for her 40th birthday.

The model and TV presenter - who has four children, Leni, eight, Henry, seven, Johan, six, and Lou, three - celebrated the milestone with a hat-themed bash at her home in Los Angeles on Saturday (01.06.13) and was thrilled with the personalised gift, presented in a framed box.

Sharing pictures of her party and favourite gift on Twitter, Heidi wrote: ''I'm 40! Look what I got from my 4 beautiful children. Thanks everyone for all the wishes, flowers, balloons and gifts.''

The German model also posed for pictures with her friends, all of who are wearing different hats, holding a number of hat-shaped cakes.

The 'America's Got Talent' judge, who is well known for her love of dressing up and costume parties, previously revealed she was really ''excited'' about turning 40 and wearing ''crazy'' headwear at her party.

She said: ''I'm excited. My friend is actually throwing a party for me and it's going to be a hat party.

''I can't wait! We'll be having burgers, ice cream, fries, chocolate. All the usual stuff.

''Everyone has to show up in hat. So it's all girlfriends of mine and everyone has to wear a crazy hat. So we're all going to sit around with some hats on, which I think is fun.''

The 'Germany's Next Top Model' host kicked off her birthday celebrations earlier in the week when the show's hopefuls presented her with a chocolate cake.