Heidi Klum Is Planning Her Most Extravagant Costume For Her Annual Halloween Party, Revealing Her Design Team Is Creating A Look That Will Be Every "Male's Fantasy". 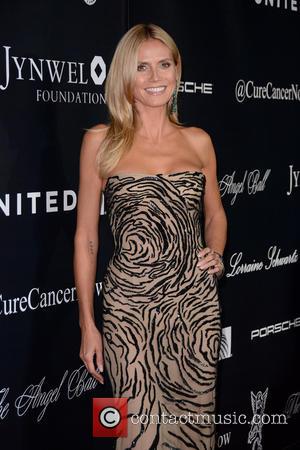 The model has become famous for the outlandish costumes and disguises she dons for her bashes, and she insists this year's choice will really turn heads.

Klum allowed People.com cameras inside a recent costume fitting, but wouldn't reveal all to the photographers - even though she did strip down for a little prosthetic work.

"This is my 16th year hosting Halloween and I've had 17 costumes, like Lady Godiva, the Visible Woman, to a 95-year-old version of myself," she explains. "I like to switch it up every year and surprise people.

"I am working with Mike Marino from Prosthetic Renaissance and his team to make this year's costume. They cast my entire body to make the special pieces... to make my costume come alive."

And the ageless German stunner also commissioned Christian Siriano, a past winner of her Project Runway TV show, to create a gown to wrap her new look in.

"He's designed amazing red carpet looks for me over the years, even for the Emmys," Klum adds. "When I came up with this year's costume, I knew Christian would help make it extra fierce."

Fans will have to wait until Halloween night (31Oct15) to see what Heidi will be wearing to her costume party this year (15), when she opens the doors to her LAVO New York bash, which will be sponsored by the brains behind spooky new horror-themed U.S. game show, Hellevator. The programme hosts are creating an installation for the party which will allow Klum and her guests to wander around a haunted warehouse.