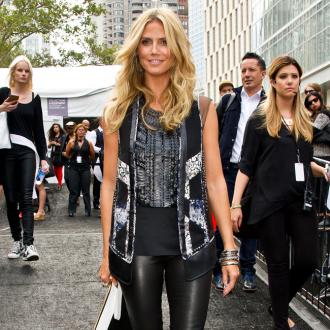 The 40-year-old model will be hosting her 14th annual bash for the scary holiday which is celebrated on October 31 at nightclub Marquee New York.

She has arranged for DJ Questlove to pump out the tunes at the venue while custom décor will be provided by publishing site Shutterfly, according to the New York Post newspaper.

Heidi has been planning her outfit since July this year when she posted an image of her face covered in a plaster cast, and caption the post: ''Started working on my Halloween costume! #HeidisHalloween. (sic)''

The blonde beauty is nicknamed the ''Queen of Halloween'' because of her commitment to the spooky holiday and she always puts in extra effort to create an extravagant costume.

Last year, she dressed as Cleopatra, donning an extravagant gold headpiece, at her party, which had to be postponed due to Hurricane Sandy which hit NYC.

Two years ago the model was late to her own party as she was busy having custom hair applied to her ape costume which she attended with estranged husband Seal, who she split from in 2012.

She wore a red transformers style robot with her face painted purple for Halloween in 2010 and pulled out all the stops to go as a sexy black crow in 2009.