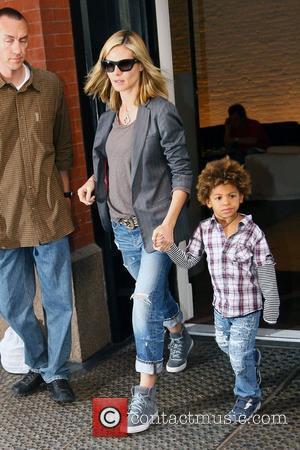 Picture: Heidi Klum and her son Henry Samuel wear matching ripped jeans as they leave their Manhattan hotel and head to the airport New York City,...

Seal has confirmed rumours his wife, supermodel Heidi Klum, is pregnant at his concert in New York.

The singer told the audience at New York's Radio City Hall: "The topic of debate outside our hotel is, 'Is Heidi having another baby?'

"Heidi and I are having another baby. I mean, Heidi is doing all the work..."

Ms Klum, 35, was in the audience with the couple's three other children and reportedly cheered the announcement.

The supermodel, who also hosts the US fashion show Project Runway, has two sons with Seal, and a four-year-old daughter from a previous relationship.