Heidi Klum disguised herself as a little devil as she saw in 2014 at the Hakkasan nightclub in Las Vegas with her boyfriend Martin Kristen and some friends. 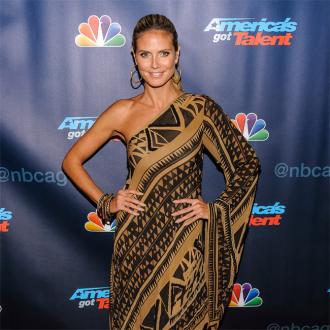 The 40-year-old catwalk beauty saw in 2014 at the Hakkasan Las Vegas Restaurant and Nightclub with her boyfriend Martin Kristen and some friends earlier this week dressed in a wig and sexy devil ears.

A source told the New York Post newspaper: ''She was dressed incognito in a short black wig, feather boa and light-up devil ears.

''Others in her group had a boa or ears, but no one else was wearing the whole get-up.''

This isn't the first time the 'Project Runway' host has gone all out on a costume for an event as she dressed up as a wrinkled old lady for her spooky Halloween bash last year.

The stunning model wore a pearl necklace, a suit skirt and blazer, as well as latex skin with wrinkle effects.

Prosthetic effects and make-up were remarkably added to age spots and raise veins in her legs to give her skin an aged appearance.

She also covered her luscious blonde locks with a white wig.

The 'America's Got Talent' judge is nicknamed the 'Queen of Halloween' because of her commitment to the spooky holiday and she always puts in the extra effort to create an extravagant costume.

In 2012, she dressed as Cleopatra, donning an extreme gold headpiece, at her party, which had to be postponed due to Hurricane Sandy hitting New York City.

Three years ago the model was late to her own bash as she was busy having custom hair applied to her ape costume, which she attended with estranged husband Seal, who she split from in January 2012.