Heidi Klum likes her four children to always look ''cool'', and says it is the most important rule in her house. 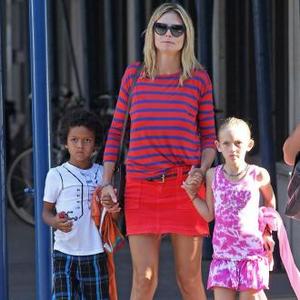 The German model - who raises four children. Leni, eight, Henry, six, Johan, five, and Lou, two, with estranged husband Seal - wants to ensure her children are always on trend and makes sure they know that when they get dressed.

''We have other rules, but the number one rule is always look cool.''

The 'Project Runway' judge believes her son Henry is the snappiest dresser because he likes to accessorize his outfits.

According to People, she said: ''Henry changes clothes 10 times a day and he wants to be very cool. I mean, he would wear a T-shirt and then he will wear a tie just around his neck, knotted, and then a belt over the shirt.''

Heidi recently created a children's collection for Babies 'R' Us - the infant department of Toys 'R' Us - which included everything from bedding to cuddly toys.

''I tackle everything from shoes, socks, underwear and pyjamas to dresses, jeans, leggings and sweaters.''