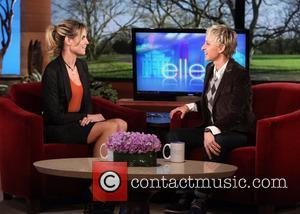 Picture: Heidi Klum appears on 'The Ellen DeGeneres Show' and reveals she isn't planning on having any more children. USA - March 2011 Photo

Supermodel Heidi Klum has laughed off reports she went commando at Sir Elton John's Oscars party last month (Feb11), insisting she was just "goofing around" when she appeared to remove her underwear and offer them to a TV reporter.
The German stunner was approached by a correspondent on U.S. TV's The Tonight Show during the Rocket Man's Academy Awards viewing party on 27 February (11), and was asked to donate her intimates as a gift for host Jay Leno.
She was seen wriggling out of her G-string before slipping it into a gift bag, but Klum insists it was all part of a planned stunt - because the former underwear model would never consider attending a function without her panties.
She tells the New York Post's Page Six column, "I was just goofing around... I was the face of Victoria's Secret - I would never give my underwear away."