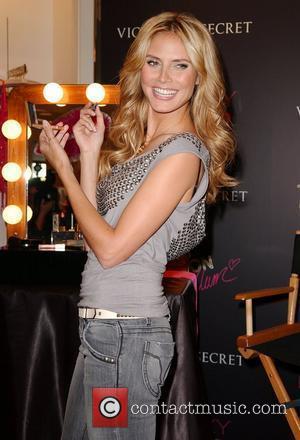 Supermodel Heidi Klum stunned husband Seal on his 44th birthday last year (06) - by reconnecting him with the foster family he hadn't seen since he was four. The singer spent the first four years of his life with the Schooling family in Romford, England, before his birth mother reclaimed him. Seal felt sure the family would never be a part of his life again - but then Klum planned a birthday surprise and advertised in a local Romford newspaper. Seal recalls, "She (Klum) said, `Schatzi, I think I've found your parents... I put an ad out in the Romford Chronicle and it was answered and these people sent me a picture and it kind of looks like you.' "She emails me the picture and I'm sitting in the studio and all of a sudden I start streaming with tears because I'm looking and I'm going, `Oh my God, there's our son - he's just a little darker... Our son Henry sits exactly like that.' "You see a picture like that from 40 years ago, and it triggers all these memories." Klum further surprised Seal on a recent taping of Oprah Winfrey's talk show - when she put the TV show's researchers in touch with the family. They filmed a segment for the show, which aired in America on Thursday (25Oct07), and revisited the home they all lived in when young Seal was known simply as Henry. Seal fought back tears on the show as Winfrey presented him with a photo album full of pictures of himself as a child - with his foster family. Emotional Klum said, "He'd never seen pictures of himself when he was a little boy... He has no memory and he has no one who could ever tell him anything." And then the tears flowed as his `sister' Hilary flew in to meet the superstar and hug him, after confessing she'd dreamed of doing just that but didn't know how to get in touch with him.