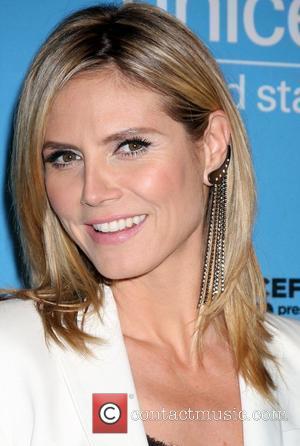 Supermodel Heidi Klum was forced to hunt out a karaoke partner at a Unicef benefit on Thursday (15Mar12) after her planned duet with Smokey Robinson fell through.
The stars were set to perform The Temptations' My Girl at the fundraiser in Los Angeles, but Robinson pulled out of the event at the last minute due to a scheduling conflict.
Klum took to the stage by herself and told the crowd, "Smokey stood me up. He was supposed to sing My Girl with me. Will anybody else sing with me?"
Host Tom Bergeron quipped, "How about instead everyone in the room helps you out with Ymca?" before Tom Hanks grabbed a cowboy hat to wear to boost the singalong, according to New York Post gossip colum Page Six.
Other celebrity performers at the bash, which raised $400,000 (£250,000) to build a school in Africa, included pregnant model Molly Sims, who belted out Madonna's Papa Don't Preach, and Desperate Housewives stars James Denton, Kyle MacLachlan and Doug Savant, who teamed up to sing John Mellencamp's hit R.O.C.K. in the U.S.A.