Review of Under Streetlight Glow Album by Heidi Spencer

Heidi Spencer, singer-songwriter from Milwaukee, has been quietly touring and recording for years, but has now finally been picked up by the estimable Bella Union for her UK debut album, Under Streetlight Glow. Her sweet country-folk is nicely edged with rasp to create a moody and dark offering that is contrastingly light on the ears. 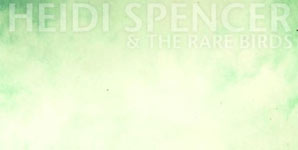 The LP kicks off as it means to go on. Tracks such as Alibi and the title-track Under streetlight Glow are understated, suggesting that, at times, less is certainly more. Sullen and melancholic, these are beautifully tragic. Particularly with Under Streetlight Glow, the whistling undertones are chilling whilst Spencer's wispy vocals haunt to the very end, leaving the listener on the brink of a cliff-hanger. This is not carbon-copy music but a fresh perspective on the folk genre. What Heidi Spencer is able to create in her music are barren and eerie landscapes, combined with muted undertones, that have the ability to peel back a raw quality in Spencer's tones. The captivating Moth met Spider, is the perfect example of this in which, like 'the moth who can't find light', we are ultimately isolated in the darkness, but yet oxymoronically comforted by Spencer's single presence with us. Purely stunning.

There is no denying that Heidi is brilliant at what she does; but this in turn becomes both her blessing and curse. The second half of the LP feels like a gentle drenching of cold water upon a hungover head, but it can all become a bit too similar. Tracks like Go to France, which whilst it has a nice addition of an accordion backing, become all too comparable, whilst the brooding sounds of Red Sky beg us to ask for something a touch lighter from this Wisconsin lass. However, it is nice to see touching lyrics juxtapose these dejected tracks such as, 'don't forget to sit in the sun whilst it's shining', because this LP doesn't need to be any darker than it gets. By the end of the album, you start obtaining feelings of de-ja-vu as you feel like the past half hour has been a blur of the forlorn. One can't criticise Spencer too much; she does produce some truly beautiful music, but it probably would have been nice to see attempts from diverging from a single staple sound. Hopefully her sophomore attempt will reveal this.

Under Streetlight Glow is a desolate journey into the barren and bleak. However it is not all doom and gloom. Spencer's girlish vocals and uplifting lyrics combine the eerie productions to create a captivating and hypnotising result. There definitely should have been more variety of experimental sounds on this album, but for a debut effort, this girl must be commended. Her music may be ominous but 2011 looks very bright for Heidi Spencer.