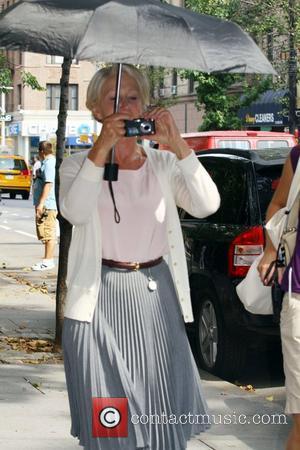 Picture: Helen Mirren on the set of the new film 'Arthur' shooting on location in the East Village New York City, USA - 12.07.10

Today sees one of England's most loved actresses turn 65. Helen Mirren has been working on stage and screen for almost 50 years and she's still able to fit perfectly into whichever role she chooses. Mirren found her first break in the acting world when she joined the National Youth Theatre and this soon lead onto her finding a new home at the prestigious Royal Shakespeare Company.
DAME HELEN MIRREN became a face known to all in the UK through popular TV shows such as the 90's/00's crime drama Prime Suspect. Lead roles in British and American films followed with the 2003 comedy Calendar Girls becoming one of the biggest films of the year. The buxom beauty took on one of her hardest roles to date in 2006 when she played HM Queen Elizabeth II, which earned the actress an Oscar and a Golden Globe.
Despite being old enough to collect her state pension and free bus pass DAME HELEN MIRREN isn't quite ready to retire just yet, the actress is set to star in a new film 'Love Ranch' alongside Die Hard and Goodfellas actor Joe Pesci. The film directed by Taylor Hackford tells the true story of Joe and Sally Conforte, a couple who opened up the first legal brothel in the USA. In a recent interview with the Toronto Sun newspaper Dame Helen commented about her dislike of romantic films claiming 'I don't even really like seeing people kiss in movies. This movie (Love Ranch) is about as romantic as I can handle.'