Scroll down for more on-set pics! 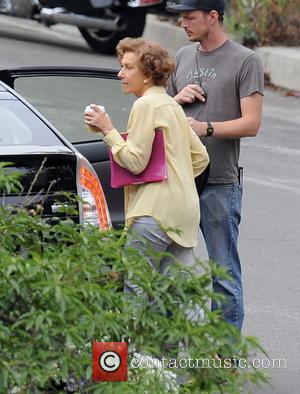 Katie Holmes, Ryan Reynolds and Helen Mirren have been hard at work filming The Woman in Gold - an upcoming American-British drama film directed by Simon Curtis and written by Alexi Kaye Campbell.

The film also stars Tatiana Maslany, Daniel Brühl, Charles Dance and Max Irons and tells the true story of a women attepting to reclaim her heritage and identity, while seeking justice for what happened to her family during The Second World War.

Helen Mirren plays Jewish refugee Maria Altmann who went up against the Austrian government in order to take back a series of Gustav Klimt paintings that had been stolen from her family by the Nazis. Reynolds has taken on the role of Maria's lawyer, Randy Schoenberg, who fights the case for her although he knows little about art.

Woman In Gold represents a screenwriting debut for award-winning playwright Alexi Kaye Campbell. It is being produced by David Thompson for Origin Pictures and by Kris Thykier, and is executive produced by Harvey and Bob Weinstein for The Weinstein Company, and BBC Films’ Christine Langan.

Filming for the project began on May 23 and is due to last eight weeks in the UK, Austria and the US, finishing up soon.

More: Katie Holmes Opens Up About Motherhood Being "The Greatest Gift" And Changing Her Life