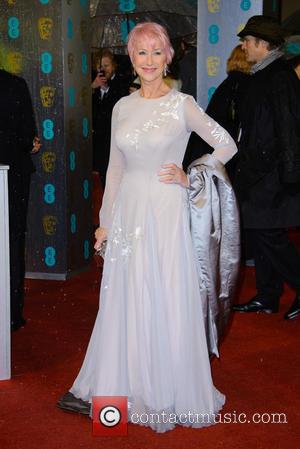 No one should be questioning why Helen Mirren has dyed her hair pink, but simply basking in its rouge glory. Mirren should stay pink forever. Despite the 'why' of the pink hair not being needed, her reply, when some children asked her, was as unexpected as the hue itself.

In a Telegraph video of the iconic actress, she said. "I just thought it would be fun. You know honestly, I was watching America's Next Top Model... and you know the British girl who won? Well, she had pink hair and I just thought 'Oooh that's looks really pretty!' So, I'm copying her basically." Who knew Helen Mirren watched ANTM?

Mirren was at the BAFTAS having been nominated for Best Supporting Actress for her role in Hitchcock, a movie about Alfred Hitchcock during the period in which he filmed his seminal thriller, Psycho. In other exciting Mirren news, the BBC reports that she'll be lending her voice to a Pixar movie. Having played three Queens during her career, she's returning as another matriarch acting the voice of the head of the university that Mike and Sulley attend in the Monsters Inc. prequel movie, Monsters University which is set for release in July 2013. Helen Mirren matched her lipstick to her hair perfectly Helen Mirren looks elegant in her stunning gown at the BAFTAs