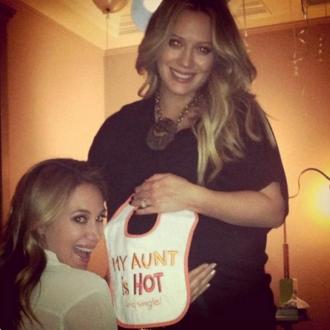 Haylie Duff admits she sees the former ice-hockey star more often than her 26-year-old sibling, who recently hinted she is trying to work things out with her husband after they announced their separation in January.

The 29-year-old beauty told PEOPLE.com: ''You know, I think maybe we all think it's a lot weirder than it really is, but we love Mike, and he's still so much a part of our family. I might see Mike actually more than I see Hilary, which is weird.''

Asked if the couple are likely to reunite, she added: ''I think they're doing great, and they're just taking their time. They're young, you know? So they're not putting stress to figure out which way it's going to go.''

Haylie got engaged to her boyfriend Matt Rosenberg in April, but hasn't started planning their wedding yet.

She said: ''I really haven't had any time to sort of Google 'wedding dresses' and Pinterest boards and all the stuff that people I think normally do. But in about a week and a half I'm going to get into it.''

But 'The Wedding Pact' actress and chef has no doubt that the apparel entrepreneur is the ''one'' for her.

She explained: ''He just complements me so well. We're very different in a lot of ways. I think really when he became close with my family, and I saw how simpatico everybody was, that's when I was like, 'Okay, so not only do I love him, but they love him too.' And I feel like that's the way it's supposed to be.''