Hilary Duff Still Working On Her Marriage, No Interest In Aaron Carter Reunion 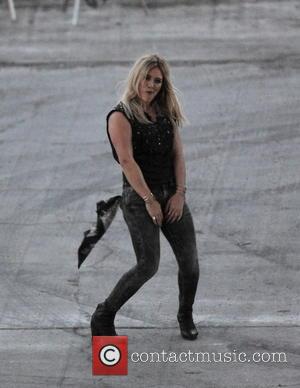 Pop star Hilary Duff has opened up about the state of her relationship with estranged husband MIKE COMRIE, insisting she has no interest in ex-flame Aaron Carter's love protestations - because she's still determined to fix her marriage.

The So Yesterday singer and sportsman Comrie separated earlier this year (14), and the news prompted Carter to offer his ex-girlfriend a shoulder to cry on, professing his undying love for Duff.

But she's not interested in rekindling her past romance with the former teen pin-up because she's not ready to call time on her marriage.

In a revealing new radio interview in Australia, she tells Kiis 106.5, "We've uncoupled, for now. I mean, if there wasn't a chance for getting back, I think we would've filed for divorce.

"I just talked to him this morning! We really care a lot about each other."

And, as for a Carter reunion, the singer insists that's not something she's planning, telling BuzzFeed.com, "I don't know how I feel (about that). I mean, that was so long ago, and obviously I'm still married, and I have a baby and we kind of just... don't know each other."