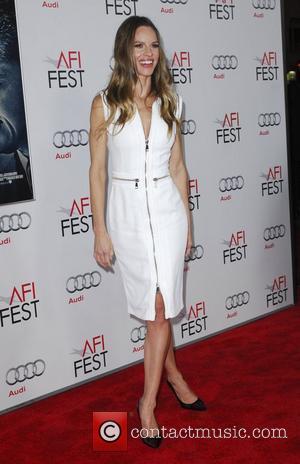 Hilary Swank has been sensationally dropped by her publicists, in a move that's thought to be pre-emptive following the actress recently dropping her management of the previous eight years in the wake of last month's much publicised PR gaff. The event in question occurred when Swank, alongside action film star Jean-Claude Van Damme, singer Seal and violinist Vanessa-Mae attended a birthday celebration for Chechen President and alleged Human Rights violator Ramzan Kadyrov, an appearance that brought widespread criticism in the press.
Kadyrov has a string of allegation against him, most recently Reuters reported that the devout Sufi Muslim had ordered several businesses to cover up the bare heads of woman in their workplaces, a source saying "authorities walked around the area, ripping off ads with women pictured in them. They told us that ads displaying women without headscarves are banned". Swank was apparently largely unaware of these and other accusations and reacted on finding out by sacking long-time manager Jason Weiberg as well as agents Amie Yavor and Josh Lieberman, saying "If I had a full understanding of what this event was apparently intended to be, I would never have gone."
However her publicists have turned against her, reports Entertainment Weekly, 42West dropping the two-time Academy Award winning actress following a disagreement as to how to deal best with the fallout from the October 5th 2011 appearance. As of yet however, they've offered no official comment on the matter.