Swank And Van Damme Turn Out For Chechen President's Birthday 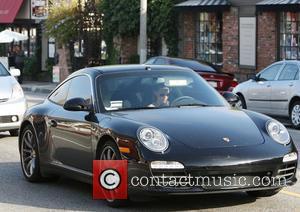 Picture: Hilary Swank out and about driving her black Porsche 911 Carrera in Brentwood Los Angeles, California - 26.06.11

Hollywood stars Hilary Swank and Jean-Claude Van Damme were among the guests at a birthday party for Chechnya's controversial President Ramzan Kadyrov on Wednesday (05Oct11).
The politician, who turned 35 on Wednesday, closed off central Grozny, the country's capital, to host a lavish bash, which saw a number of skyscrapers illuminated as fireworks were simultaneously set off.
Violinist Vanessa Mae, who was paid a reported $500,000 (£312,500) to attend the event, performed for guests.
Van Damme took to the stage during the party to pay tribute to the president, telling an applauding crowd, "I love you Mr Kadyrov!"
Later in the evening, Oscar-winner Swank, who took a walking tour around the city earlier in the day, also gave her own special birthday message to Kadyrov, saying, "I could feel the spirit of the people, and I could see that everyone was so happy. Happy birthday Mr President."
Shakira was originally rumoured to be performing at the party, but she dismissed the story on her Twitter.com page last week (end02Oct11).