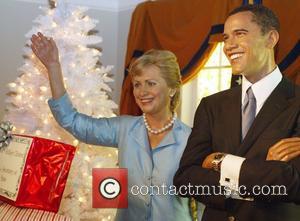 M.I.A. has enlisted the help of U.S. Secretary of State Hillary Clinton in her ongoing visa battles, after authorities refused the rapper's mother permission to visit her newborn grandson.
The Paper Planes hitmaker has clashed with immigration officials over her own status after courting controversy with her comments about political unrest in Sri Lanka.
Now the star's family has been dragged into the visa dispute - her mother Kala tried to visit M.I.A.'s baby son Ikhyd but was blocked from entering America, prompting the rapper to call on Clinton for help.
She tells Q magazine, "They've singled me out. They said my mum would be fine if I just apologised to the Sri Lankan embassy. Which I'm not gonna do. It's not like she actually knows how to make a f**king bomb, strap it on and walk into Tesco's (supermarket)... We've had Hillary Clinton involved. Hills got back (to us) and she was like, 'You know, it happens...'"