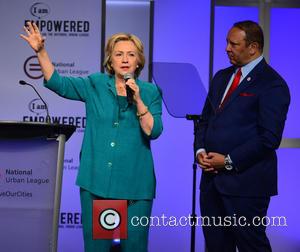 According to The Hollywood Reporter, Clinton gave a 30 minute speech on her policies and thanked the stars for being "angel investors" in her bid to succeed Barack Obama as the next democratic, and first female, President in the White House.

Kardashian posted a 'selfie' with the former First Lady on Instagram.com and West can be seen trying to squeeze into the background of the picture, behind Clinton's head.

The reality TV star added in the caption, "I got my selfie!!! I really loved hearing her speak & hearing her goals for our country! #HillaryForPresident".