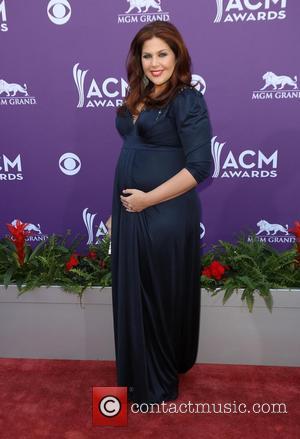 Singer Hillary Scott braved the stifling heat to perform with her band Lady Antebellum at the Stagecoach Festival on Saturday (27Apr13) while heavily pregnant.

Temperatures hit a high of 104 degrees at the music fairgrounds in Indio, making an uncomfortable situation for Scott, who is currently expecting her first child with her drummer husband Chris Tyrrell, a baby girl due in July (13).

The musician waited out the duration of the event in her air-conditioned trailer until the group took to the stage in front of more than 40,000 fans, and she carried on with the trio's 90-minute set like a pro, opening with the first single off the band's upcoming Golden album, Downtown.

The group played a number of hits before welcoming fellow performer Dierks Bentley for a surprise rendition of Bruce Springsteen's I'm On Fire, and the show ended with a two-song encore of I Need You Now and We Owned the Night.

Scott's bandmate, Charles Kelley, joked the next time they play the festival there would be a fourth member of Lady Antebellum, saying, "We're going to start her really young."