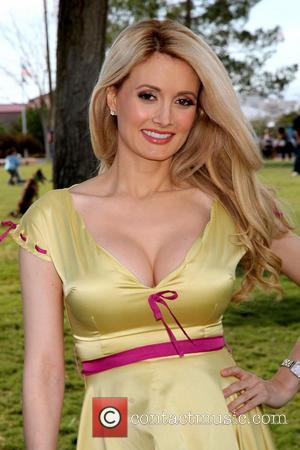 In the week that the world's most famous woman gets pregnant with the future heir to the English throne, it's no time to have your own pregnancy worries because almost no one will care or pay attention. Nevertheless, Holly Madison, who found modest fame as a Playboy Bunny and as one of The Girls Next Door, a reality TV show showing Hugh Hefner's favourite girls that lived in the Playboy mansion, was hospitalized yesterday for complications of severe morning sickness, US Magazine reports.

These days the 32 year old is 7 months pregnant and was hospitalized with severe morning sickness on Tuesday (4th Dec) tweeting about the event with a picture of herself in the hospital bed, and saying "Almost 7 months and morning sickness took hold! Glad to be otherwise ok, tho". Later, after a flood of well wishes from fans she tweeted thanks to them "Thank you for all the get well wishes! Keeping me entertained-forgot to bring a book with me."

She describes herself as a 'smart blonde' and wanted to make a career for herself after her relationship with Hef ended which eventually lead to the show ending too. She's appeared on Keeping Up With the Kardashians, CSI, Dancing With the Stars and even has her own show that ran for two seasons, called Holly's World.