The BBC has received 139 complaints after 'The Voice' host, Holly Willoughby, wore a rather racy gown on the pre-watershed show. 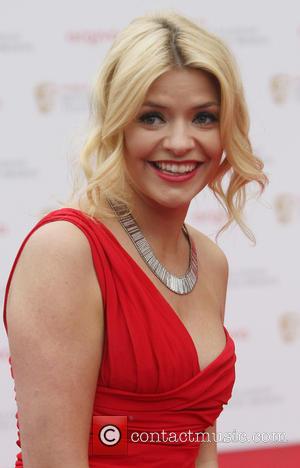 TV host Holly Willoughby, who has previously earned herself the nickname 'Holly Willoughbooby' for wearing clothing that flashes off her rather er...ample cleavage, drew attention to herself yet again on Saturday's (22 June) final of BBC singing talent contest The Voice.

The 2.5 hour show saw Northern Irish Andrea Begley sing her way to victory, but Holly's outfit gave the partially-sighted 27 year-old a run for her money in the publicity stakes, according to The Independent.

The gown in question was a Gucci black silk floor length piece from their 2012 collection, featuring floral lace embellishments and cascading Swarovski crystals to create a rather deep V down the chest - the latter aspect created quite a stir amongst viewers.

The BBC have addressed the significant number of complaints it received, despite the 8.7 million viewer total: "We're sorry if some viewers found Holly's dress to be unsuitable. Holly enjoys fashion and we felt the dress she wore for the live final of The Voice UK was glamorous and wholly appropriate for the occasion. We don't believe it would have gone against audience expectations for a TV spectacle such as this."

However, The Voice's official Twitter account did feel the need to give viewers a little heads up before Holly turned heads: "@BBCTheVoiceUK WARNING: when you see what @hollywills is wearing, you might need a little lie down. #theVOICEukFINAL"

Particular anger was directed at the The Voice's pre-watershed timing - from 7:15-9:30pm, which meant that a large proportion of the show was aired during a time when broadcasters should be avoiding unsuitable material for children, including nudity, profanity and violence.

Willoughby has received complaints for her outfits before - 5 after a Dancing on Ice episode in which she wore an eyebrow-raising white number - but The Voice's 139 complaints is a mere drip in the ocean compared to the furious storm of 3000 complaints that Simon Cowell's The X Factor received in 2010 when guest performers, Christina Aguilera and Rihanna performed highly sexual routines.

Could the criticism sparked by Holly's glamorous, yet revealing attire be an overreaction or were you offended by Holly Willoughby's pre-watershed dress? Holly Willoughby Is Usually Well-Dressed But Has Sparked Criticism For Her Racier Numbers.