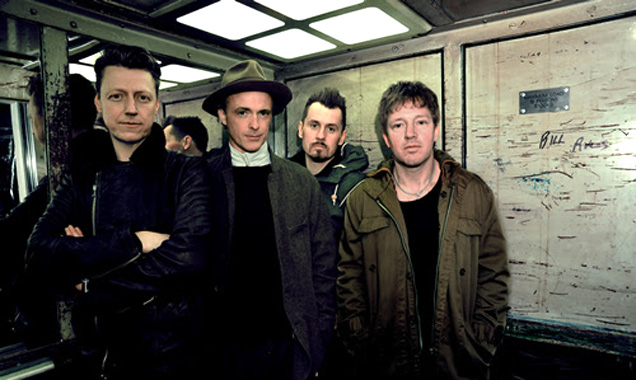 4-Day Ticket and VIP pass, which include 8 days free camping from July 14-21, and VillaCamp tickets are available

Travis
The four pieces band from Glasgow (Fran Healy, voice and guitar; Dougie Payne, bass; Andy Dunlop, guitar; and Neil Primrose, drums) made clear from the beginning of their career that they were a one-of-a-kind  band; composing and performing oneiric ballads such as 'Writing To Reach You'- full of dreamy and choral melodies partnered with delicious guitar chords.

With their two first albums 'The Good Feeling' (1997) and 'The Man Who' (1999) they became one of the most popular bands of post brit pop. Another six albums later, 'Where You Stand' (2013)', the latest release, it's clear to see they've built an honest and faultless career.

Razorlight
Johnny Borrell's band was formed in 2002 in London. The band stopped for an hiatus after their third album was released  and after a many very busy years in which they published two successful records 'Up All Night' (2004) and 'Razorlight' (2006); and a third one, less important, 'Slipway Fires' (2008). And in between record and record, uncountable shows, either alone or opening for Queen or Richard Ashcroft which ended up to place the band on the top.Johnny Borrell released in 2013 his first solo album, 'Johnny 1', even though he always left opened the bands' return.

Hozier
Irish, born on St. Patrick Day, Andrew Hozier-Byrne, is artistically known as Hozier. He burst onto the music scene with the devastating song 'Take Me On Church', which is accompanied by a video of shocking images.
He started first band when he was only 15 years old and is a self-taught guitarist and pianist, he then went on to study Music at Trinity College. Their main influences are Rhythm NïBlues, Soul, Gospel or Jazz. At the moment, he has released two EP's: 'Take Me To Church' (2013) and 'From Eden' (2014).

Chloe Howl
Chl"e Howl started her career at 10 years old with her band The Trollmates, then at only 19 years old this extremely young Brit launched out her solo career. Thanks to an amazing first single 'No Strings', a synth-pop song full of forceful bass riffs and a voice with a huge personality she is now on the road to success. The song was included into the film 'Kick-Ass 2' soundtrack.

In December 2013 she released her second single 'Paper Heart' and her first album will be out by the end of next summer 2014 - she is definitely someone to keep your eye on.

LA FEMME
The French band from Biarritz are a mixture of clashing genres, and apparently, as dissimilar to each as electronics is to punk and punk is to surf music.  Their music sits somewhere between Kraftwerk and Dick Dale to The Velvet Underground and Link Wray and the keyboardist and vocalist Sacha Got and the guitarist Marlon Magn'e are behind it all.
Between 2010 and 2013 they released three EP's, the last one of them the homonym 'La Femme' . In April 2013 they release their expected first album, 'Psycho Tropical Berlin', a work which reaches our ears as a breath of fresh air, indisputably, from the beginning to the end.

JERO ROMERO
Jero Romero started his career as a songwriter and lead Singer of The Sunday Drivers. They released four excellent albums, each one full of timeless pop which found the band a huge amount  followers, in both Spain and France, amongst other places over the globe. Nevertheless, The Sunday Drivers parted ways in the summer of 2010 and played their last show at FIB.

Now Jero Romero has started a solo career, producing two albums so far. The first; 'Cabeza de Le¢n' (2012) and a second will be released in the next weeks, both auto produced and edited and for his live shows, Jero has an excellent line up of renowned musicians, highly experienced to play alongside him, it will be very special indeed.

TRIANGULO DE AMOR BIZARRO
They launched themselves in 2007 with the self-titled 'Tri ngulo de amor bizarro', album and within a few months they had catapulted themselves from anonymity to being included on festival line ups all over Spain. The album was published in M'xico, and was critically acclaimed by both press and public;  whom they won over with their cunning and original music.

'Victoria M¡stica' (2013), their fourth and most recent album, has been recognized as the best of year by Me Hace Ru¡do (Mexico), Mute Magazine (Argentina), Rolling Stone (Spain), Jenesaispop (Spain), etc.

MUCHO
Mucho are a four piece band which, as Mart¡ describes (voice, guitar, keyboards), play cosmic pop and rock, decorated with a drops of psychedelia. In 2013, they released their second album, 'El Apocalipsis seg£n MUCHO', a concept album which contemplates the idea of death as a rebirth. According to their new plans the band feels they are here to build and create something brand new and a lot more risky than ever seen before.

KOKOSHCA
Kokoshca are very clever, they are parapsychological and they look to the wild east when all the rest look to west. Kokoschka are inebriated, as the whole world obsesses over photographs of themselves, day after day, we prefer to gaze in the crazy portraits they paint: convoluted, absurd, 'goyesco' and Spanish.
They are wild, yes they are. And they are two-headed, as Demikhov's dog, because they also know how to write weird ballads. Their future will always be interesting, valiant and, above all, dangerous.

EL ELTIMO VECINO
Solo project of Gerard Alegre Dria who is mainly influenced by eighties music -from Spain; Aviador Dro, D'cima V¡ctima, and from UK; OMD, New Order and The Cure-, there are even nods towards subsequent followers such as Family, a nineties Spanish band and The Drums.
His first album was released in the summer of 2013 and has been one of the most recognized and sought after albums ever since. He has since gained a legion of loyal followers due to his perfect first album; full of incredibly good songs and his intentionally lo-fi sound.

THE PARROTS
The Parrots are a very young garage rock power trio from Madrid. They are fans of Burguer Records and of the garage rock in general. In the nineties, they could have hobnobbed without any problems with bands as The Stomach Mouths or The Wylde Mammoths, they could have had the cover of Bucketfull of Brains and Greg Shaw could have been them placed on BOMP! Nevertheless, we are in 2014 and there are many bands, such as The Black Lips, with whom they are often compared to.

With a couple of singles and a few frenetic live shows under their studded belts they are building quite a following and attention from music industry . Their recent shows at Austin's SXSW are living proof of their potential and future possibilities.

SKIZOPHONIC
Skizophonic are the first indie band from Benic.ssim itself to actually perform at the festival. They were one of the three finalists of 'Proyecto Demo 2010' -a contest for up and coming bands organized by the festival along with Radio 3-. They released their first album, 'Gossip' in 2011 and most recently they have released 'Velodrome' (2013).
They are highly influenced by British's pop-rock, Supergrass and Miles Kane, and by the Swedish The Hives.