Huey And The New Yorkers

Huey And The New Yorkers 2012 Christmas single 'Christmas By The Side Of The Road' was taken from his debut album 'Say It To My Face' and all proceeds from the single were donated to the Help for Heroes charity as well as the US's Wounded Warrior Project.

The accompanying video shows Huey Morgan enjoying his Christmas by the side of the road as it were as he busks in the cold streets of London. Propped up beside him are cardboard signs reading: 'At Christmas time, remember our veterans'. The feat earned him over £100 in passing donations from people walking past doing their shopping and it's no wonder; the track is a beautifully relaxed number with classic bluesy acoustic guitar and Huey's deep and raw crooning.

He explained recently his reasons for supporting his chosen charities. 'These men and women not only risk their lives but they will also have to the deal with the long-term psychological effects of war', he said. 'It's far too easy for everybody to take this for granted - out of sight, out of mind.'

By Andy Peterson in Music Reviews on 01 October 2012

The late Robert Palmer didn't say it first, but he probably said it best; some guys have all the luck. Huey Morgan must wake up feeling like he has a back garden full of four leaf clovers for just as the Fun Lovin' Criminals seem less and less likely to recapture their former glories, his solo career as a DJ has conveniently picked up most of the slack. Now more in demand on both sides of the Atlantic than at any time since the band's heyday at the end of the last century, the man who has the likes of Bono and Kevin Spacey on his Facebook page has apparently felt the urge, after becoming a dad for the first time, to take some stock. 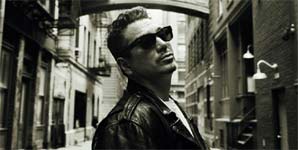 It helps too that the Crims are on a temporary hiatus following the release of 2010's Classic Fantastic, so, whilst that vehicle sleeps, the opportunity for starting a new gang, it appears, was too hard to resist. Staring out from the cover of Say It To My Face, he looks for all the world like Mickey Rourke in his pomp, and whilst this is obviously a contrivance, for once the chewy sense of Noo-Yoikness baggage which comes with him feels a little more authentic.

Given that the selection policy for his shows is about as eclectic as they come - Toots & The Maytals rubbing shoulders with The Misfits and Run-DMC - the most obvious pitfall to avoid was making a record that sounded like a misguided stab at one of his own playlists. Here, gladly, his mission is accomplished, and also dispensed with are some of the more louche Vegas show band excesses of the FLC's back catalogue, a balance which may attract back some of those who called it quits and bowed out at Loco.

Continue reading: Huey And The New Yorkers - Say It To My Face Album Review

1
Huey And The New Yorkers