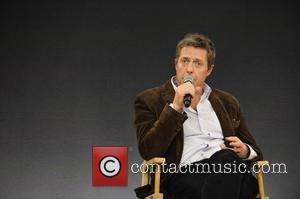 Hugh Grant still dreams of portraying The Hulk and James Bond on the big screen, but has never been asked to play either character.

The Notting Hill star has often been linked to the role of superspy 007 but he admits he's never been officially asked to even audition for the part.

In a Reddit.com chat with fans on Friday (10Oct14), the actor said, "I never was offered James Bond, sadly. Which is a shame, because I think I would look nice in a white tuxedo. And I do love to kill."

And he jokes about battling Mark Ruffalo for the role of The Hulk in The Avengers movies, adding, "I've always cherished the role of the Hulk, and am furious no one has offered it to me."

Grant also has a soft spot for Batman, quipping, "When I was seven, I had a utility belt, a Bat-cape, Bat handkerchiefs, and I still to this day sometimes like to wear my underpants outside my tights."