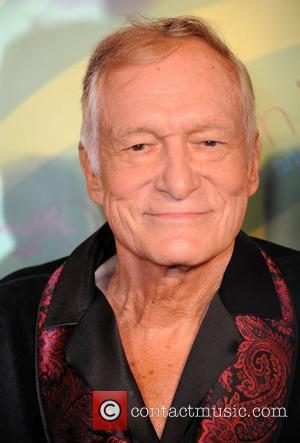 Hugh Hefner is the latest celebrity to fall victim to a Twitter 'death hoax', after word that the Playboy founder had tragically passed away began circulating online yesterday (11th July 2011). After an anxious couple of hours, fans of Hefner were relieved to find the 85-year-old had rubbished the rumours in a humorous post on his own Twitter page, reports CNN.
Referencing the American author Mark Twain, Hugh told his 750,000 followers that rumours of his death were "greatly exaggerated" adding, "I'm very much alive & kicking". Not only was the magazine magnate alive, he told fans he was "lying in bed" with the Playboy model Shera Bechard. Hefner isn't the first celebrity to fall victim to a Twitter hoax - earlier this year rumours spread that comedy star Jim Carrey had died during a snowboarding accident. In December 2010, fans of the actor Morgan Freeman began mourning his death after a Twitter user retweeted a fake Cnn post reporting he had passed away. Christian Slater is another celebrity to have his death wrongly reported on Twitter.
Hugh Hefner launched Playboy in December 1953, with the first issue featuring Marilyn Monroe. He had previously worked as a copywriter for Esquire magazine.