Hugh Jackman injured his eye after filming a stunt for an 'Oprah' television special which saw him abseil down the Sydney Opera House on a zipline went wrong. 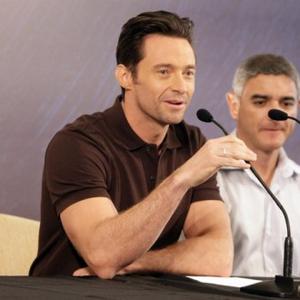 Hugh Jackman injured his eye after a stunt he was filming for an 'Oprah' television special in Australia went wrong.

The 'Wolverine' actor glided to the stage at the Sydney Opera House on a flying fox zipline, but failed to stop, smashing into the rigging of the set which caused a piece of debris to hit him in the face.

Hugh emerged with a cut over his right eye while show host Oprah Winfrey rushed to his aid.

After medical staff attended to him, Hugh still managed to joke about the incident, saying: "I've never been hugged by a paramedic. That was so much fun until the end. Too much fun."

Shooting was suspended and Oprah told the 6,000 people in the audience - which included Hugh's two children, Oscar, 10, and five-year-old Ava - and she told the crowd: "Let's get some ice otherwise it's going to swell."

The 42-year-old actor assured the crowd he was OK, and claimed the accident happened as he had got "overexcited" and distracted by the famous view of Sydney Harbour and the city's famous Harbour Bridge.

Talk show queen Oprah filmed two shows of her final ever series in Sydney, which she dubbed her 'Ultimate Australian Adventure'.