By Lauren Mullineaux in Music Reviews on 22 October 2012

Iamamiwhoami's debut record Kin is an arresting multimedia project that takes full advantage of the immediacy and intimacy the internet age offers musicians. In developing this project, Jonna Lee and producer Claes Bjorklund have created a world, much like that the internet offers, where artistic desires are not inhibited by the fractures of time or space and an album that's universally and inexplicably grand in its simplicity. 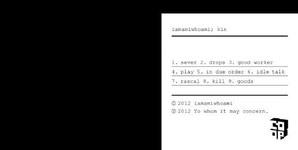 Jonna Lee has changed the concept of the album and methods of release with Kin which has seen the release of all nine tracks as singles on her website with accompanying videos; together with the record comes a 45 minute film featuring all of them. The videos which feature Lee and five large hairy creatures (think Where The Wild Things Are) are a bizarre and often creepy visual accompaniment to the similarly edgy and unsettling synth pop. Each video continues the story arc of the previous and has been continuous since the group's first releases in 2009 with the Preludes and Bounty series'. According to Lee, each 'hairy thing' represents a part of herself and most others, it's about life with and without these parts of yourself. iamamiwhoami is truly a multimedia entity as opposed to a band, yet while these videos are beautiful and deeply intriguing they are not necessary to appreciate these nine eclectic tracks which merge together numerous electronic genres and wrap them in a highly accessible pop format.

Like seemingly everyone in the Scandinavian music scene, Lee has a catastrophically pleasurable vocal style. She is playfully almost disturbingly childlike on tracks like 'Goods' which sees her dressed as a clown at a disco and ends in a black box which the album cover then represents. It is these simple chains of continuity which make iamamiwhoami such an interesting concept; to truly understand this project you have to delve into its history. Though equally you can stick this on and let the relaxing trip-hop synth of 'Sever' or the menacing bass of 'In Due Order' wash over you as you drift into this strange world.