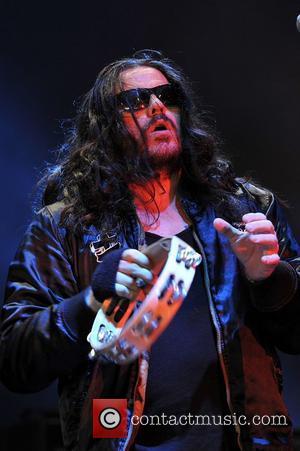 British rocker Ian Astbury and his The Cult bandmates cheated death earlier this week (begs02Jul12) when their tour bus crashed and narrowly avoided plunging down a sheer embankment.
The vehicle was transporting the group from Split in Croatia to Ljubijana, Slovenia when the accident occurred.
Nobody was seriously hurt in the smash, but Astbury - who was the only passenger awake on the bus when the crash happened - suffered damage to his neck, back and shoulder after being thrown from his seat.
He explains, "All of a sudden, the bus veered violently, hit the guard rail and tipped on a 45-degree angle, then righted itself and came to a halt. The guard rail was the only thing that prevented us from going over an 80-foot drop."
Astbury received pain medication for his injuries and the band continued its journey - but the singer admits the accident has left the rockers badly shaken.
He adds, "No one has had any sleep, so the guys are pretty beat, and we are still in shock, to be honest. You never think something like this is going to happen to you, and it just did."