As far as he's concerned, the virus is just a lie designed to control the public.

Once again, Stone Roses frontman Ian Brown has caused a stir with his opinions regarding the COVID-19 pandemic. He's even dropped out of Warrington's Neighbourhood Weekender festival over alleged requirements that attendees must be vaccinated. And yet, he's still set to headline TRNSMT... 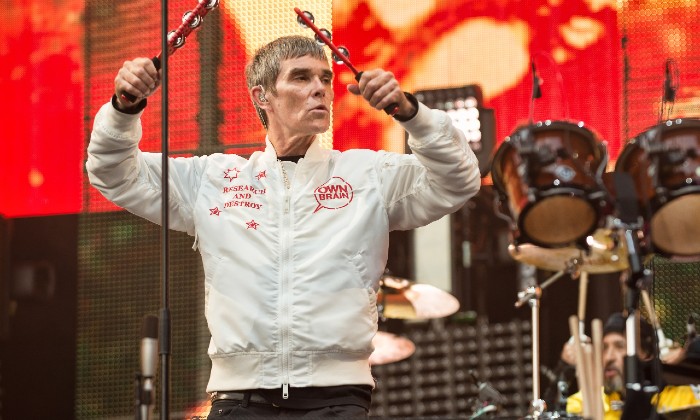 Back in October 2020, Brown outed himself as a COVID sceptic with a series of nonsensical rants on Twitter essentially claiming that the whole pandemic is a pack of lies dreamed up by governments and billionaires. It's no surprise, then, that as well as refusing to wear a mask, he's also refusing to get a vaccination for the virus.

"All major festival promoters have held talks with SAGE/GOVT since early December planning vaccine proof as condition of entry", he wrote on Twitter last week. "Money is their God. Any musician going along with this is a collaborator and a disgrace!"

This week he followed up with a similar sentiment: "My May tour of Ireland is cancelled as both our islands are currently medical experimental prison camps and we are being held hostage by GOVT for big pharma".

All major festival promoters have held talks with SAGE/GOVT since early December planning vaccine proof as condition of entry. Money is their God. Any musician going along with this is a collaborator and a disgrace!

The idea of a "vaccine passport" to be required for events and even pubs has been up in the air in the UK, though the government is yet to make any decisions regarding conditions that will come with the lifting of lockdown. So it seems strange that the prospect is already enough to make Brown pull out of performances.

Not that festival goers care; the vast majority of the internet are glad that they don't have to listen to the anti-vaccine vitriol that will no doubt pour out of him between songs. He also seems to have been dropped from the Victorious Festival line-up, though Glasgow's TRNSMT Festival still seem to be promoting him as a headliner as they prepare to move their event from June to September. Good luck with that crowd, Ian!

"The scenes when Ian Brown walks on stage at @TRNSMTfest and gets booed off", said one Twitter user.

Another added: "I hope they make Trnsmt a vaccine passport event to absolutely rattle Ian Brown."

Ian Brown's lyrics have got progressively worse over the years. https://t.co/5f9ffYQ3Nk

Meanwhile, Ian's rants have left many wondering whether his boycotting of events requiring a vaccine passport would extend to his visiting pubs. If it does, it looks like his lockdown may extend a very long time.

An Englishman, a Scotsman and an Irishman walks into a bar.

None of them is Ian Brown...

Read more about Ian Brown's thoughts on COVID-19 here (if you dare).