Sir Ian McKellen gets irritated when people confuse his 'Lord of the Rings' character Gandalf with 'Harry Potter' teacher Dumbledore. 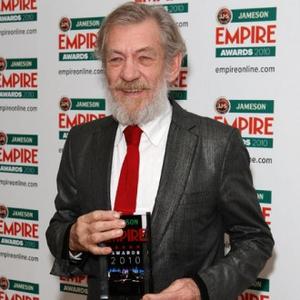 Sir Ian McKellen gets frustrated when people think he is Dumbledore from 'Harry Potter'.

The 71-year-old actor confesses he is a fan of his character in 'Lord of the Rings', white bearded Gandalf, but he gets annoyed when people mistake him for Dumbledore from the 'Harry Potter' movie series.

He said: "I'm a huge fan of Gandalf myself. For me this gentle, friendly and courageous wizard is a real role model. I don't mind if people associate me with this film character. I only get mad if someone mistakes me for Michael Gambon, the actor from the 'Harry Potter' films who plays Dumbledore.

"When that happens I say 'No! I played the original by J.R.R. Tolkien, not the knockoff by Joanne K. Rowling!' "

Ian also admits he will definitely play a part in the upcoming 'Hobbit' movie, with assurances coming from new director Guillermo Del Toro.

He told German newspaper Frankfurter Allgemeine Zeitung: "Instead of Peter Jackson, Guillermo del Toro is going to direct the film and it would be understandable if he changed the cast to realise his own vision of it. But he has already assured me I would be in the film."

Recently fellow 'Hobbit' star Andy Serkis confirmed work on the movie had been postponed until later this year.