Sir Ian McKellen has revealed he still lives as normal life as possible and regularly goes out in public and rather than shy away from attention he enjoys interacting with his fans. 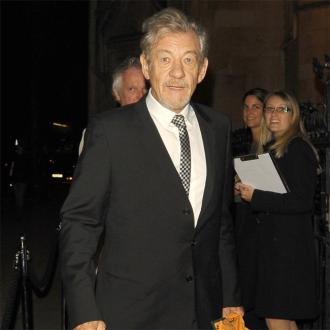 The 73-year-old actor has achieved worldwide fame from his roles as wizard Gandalf in the 'Lord of the Rings' films and Magneto in the 'X-Men' franchise but he still travels on public transport and does the same things as everyone else.

Although he is often noticed by fans when he is out, Ian insists he enjoys meeting his fans because it's a chance for him to connect with his audience

He told the new issue of Reader's Digest magazine: ''I remember a friend in Hollywood, just before 'Lord of the Rings', saying, 'You know your life is going to change forever.' It has, but entirely beneficially. I'm a rather shy person, but now, because people connect me with Gandalf, that gives me a sense of security. I go on the Tube (London Underground trains) the whole time. If I go into town, two or three people will recognise me and say hello, but what's wrong with that? Normally they say, 'Thank you very much.' ''

Ian believes too many of his fellow actors are too nervous of the public and don't know how to handle encounters with their fans.

The 'Hobbit: An Unexpected Journey' star believes the reason for this is that not enough of his peers act on stage so don't know how to handle an ''audience''.

He explained: ''Why do you act? You act for an audience, In the theatre, you're their presence. Film stars don't know what it is to have an audience. You see some at awards ceremonies who can hardly make it to the middle of the stage they're so nervous. There's a microphone so they don't have to project. And they read their words. You see a theatre actor come on and it's, 'Oh hold on, there's a show happening.' Hugh Jackman at the Oscars - there's a theatre man, who happens to be a film star.''

The full interview with Ian appears in December's issue of Reader's Digest out November 20.