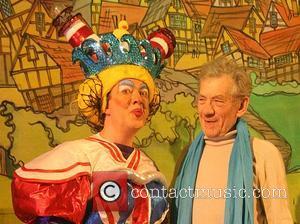 Picture: Sir Ian Mckellen with actor Stuart Robertson as Sarah the cook on stage of the play 'Dick Whittington' at the Cochrane Theatre England, London...

Gay actor SIR Ian McKellen has slammed British comedian Matt Lucas for his portrayal of homosexual characters - because he fears the camp comedy sketches fuel prejudices.
The openly gay comedian pokes fun at homosexuality in hit TV show Little Britain, playing a flamboyant Welshman who dresses in tight latex clothing and proudly proclaims himself "the only gay in the village."
But MCKellen thinks such outrageous television skits only serve to publicise offensive stereotypes.
He says, "I have to confess that I am a little disquieted at times by the way that gays are portrayed, particularly on television. I know Matt Lucas will say that he is gay and it is not offensive but I don't think it gets the right message across. If you are gay you don't have to be camp."
And the veteran star wants the word "gay" to be dropped altogether in a bid to curb prejudices: "The word gay has become used as a derogatory term and this is something which education can help to resolve. Either that or we choose another word to describe ourselves. I rather like another G word - glorious.
"People come to know themselves at different times. I was 49 before I understood who I was. I think that if the world had been different when I was young, then I might have had the courage to come out sooner."