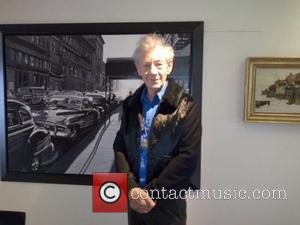 Picture: Ian McKellen posted this picture on Twitter with the caption: 'In case you're wondering about my Topman look. '

Sir Ian McKellen and George Michael were honoured with the top prizes at a British gay magazine's awards ceremony on Tuesday night (16Oct12).

The two openly gay stars both received the Icon Award from editors at Attitude magazine in London.

British singer Will Young received the Culture Award, while MCFly drummer Harry Judd was honoured with the Hottest Man of the Year prize.