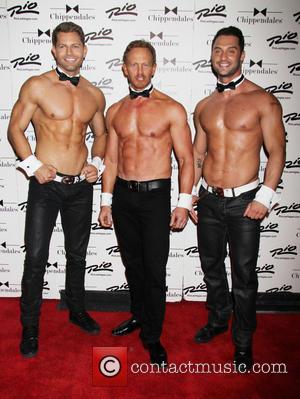 Actor Ian Ziering stripped off in front of a Las Vegas crowd on Saturday night (08Jun13) as he made his debut as a Chippendale dancer.

The Beverly Hills, 90210 star donned the male dance troupe's trademark bow tie and cuffs to show off his buff body at the Rio All Suite Hotel and Casino in Sin City.

Ziering embarked on a strict fitness regime ahead of his big reveal, and has defended his decision to strip in front of female fans.

He said, "It's a sexy, sensual show, and the girls do go wild. It's not a salacious, scandalous, back-alley production. The theatre is $10 million. More people than not have seen me on television in swim shorts, so I don't have any problem stripping down. We had shirtlessness on 90210, so I take all this with a grain of salt. With this new look, I have nothing to be ashamed of, and I can now stand quite tall with the other guys in the cast. They are great physical specimens."

The 49 year old is not the first famous face to join the Chippendales - 98 Degrees singer Jeff Timmons and Baywatch's Jeremy Jackson have both previously joined the strippers for a Las Vegas residency.