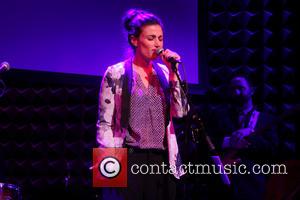 The producers of Idina Menzel's new Broadway musical are having fun with John Travolta's slip-up at the Oscars - they've changed the star's name to match what the Grease star called her on the show's playbill.

Travolta mispronounced Menzel's name as Adele Dazeem at the Academy Awards on Sunday night (02Mar13) - and immediately became the butt of jokes.

He eventually apologised for the gaffe, admitting he had been beating himself up for getting the singer's name wrong.

On Tuesday (04Feb14), producers of her new show If/When poked fun at Travolta's mistake in the playbill for the production.

It read: "At this performance, the role of Elizabeth will be played by Adele Dazeem."

Menzel's resume has also been 'Travolta-fied' for the playbill, with her role in Rent switched to Nert and her character in the musical Wicked reworked as Ephraima instead of Elphaba.