Iggy Azalea has a 'heart of gold', says Rita Ora

Rita Ora surprised fans on Wednesday night (17.09.14) by joining rapper Iggy Azalea on stage at her concert at the O2 Shepherd's Bush Empire in London for a performance of their single 'Black Widow'. 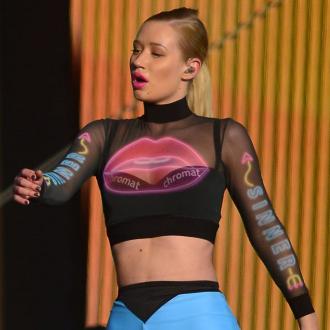 Iggy Azalea was praised for having a ''heart of gold'' by Rita Ora when the pair performed together in London on Wednesday night (17.09.14).

The Australian rapper was playing a sold-out concert at the O2 Shepherd's Bush Empire when Rita surprised the crowd by walking on stage.

Her entrance was met with cheers and screams and the two pop stars then launched into a rendition of their single 'Black Widow'.

When the track was done, Rita, 23, couldn't stop gushing about Iggy, saying: ''This girl is the truth, I'm telling you that London. She's got a heart of gold.''

During Iggy's hour-long set she performed her hit singles 'Fancy', 'Bounce' and 'Work', while gyrating with her four female backing dancers, all of whom were dressed in skimpy monochrome leotards.

The 24-year-old star almost suffered an injury when she slipped soon after she arrived on stage.

While performing her opening track 'F**k Love', she stumbled on the second floor of the double-levelled stage but luckily managed to save herself from falling to the ground.

After the incident, she joked: ''I only just escaped my own death up here on stage!''

It's not the first time the 'Change Your Life' singer has taken a tumble on stage. Last month, at a benefit concert before the MTV Video Music Awards (VMAs), Iggy fell off the stage when she was performing with Charli XCX, but luckily she emerged from her tumble unscathed.