Iggy Azalea Hits Back At Critics 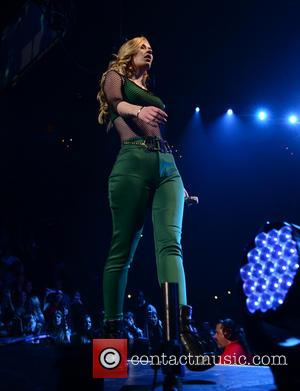 Picture: Iggy Azalea - Photographs of a host of pop stars as they gave live performances at the Y100 Jingle Ball 2014 which was held at...

Iggy Azalea has aimed a lengthy rant at her detractors, including rappers Azealia Banks and Q-Tip, who have been questioning her place in hip-hop.

The Fancy hitmaker has received a barrage of criticism from Banks for attempting to take on African-American culture issues in her songs, but then keeping silent on those problems when two U.S. police officers, who killed two unarmed black men in separate incidents, were not indicted for their actions last month (Nov14).

A Tribe Called Quest frontman Q-Tip also took to Twitter.com to teach Azalea a brief history on hip-hop culture over the weekend (20-21Dec14), and shortly afterwards rappers T.I., Lupe Fiasco and will.i.am. came to her defence over social media.

Azalea has now broken her silence on the criticism, writing in a series of posts on Twitter, "Thanks Lupe and will.i.am what you guys said was really nice and I appreciate it... I find it patronising to assume I have no knowledge of something I'm influenced by, but I've also grown up with strangers assuming that... Im (sic) also not going to sit on Twitter & play hip hop squares with strangers to somehow prove I deserve to be a fan of or influenced by hip hop... I would have to be an idiot or incredibly bored to think that would change anyones (sic) already cemented opinion of me. I'm neither...

"How you feel about me blending musical genres together doesn't bother me, no one is making you support or buy pop rap albums. Its (sic) entirely up to you what you support and are interested in, thanks if you are interested in me and enjoy my music. I love to hear that!... now, if you guys don't mind... I'm on my Christmas break enjoying it with people I actually know.... in real life. You should do the same.... Merrrrrrrryyyyyyyy Chrissstttttttmmaaassssssssss (sic)! see ya in the new year (sic)! peace and love!"