Iggy Azalea: 'I Thought Ariana Grande Was A Little Girl' 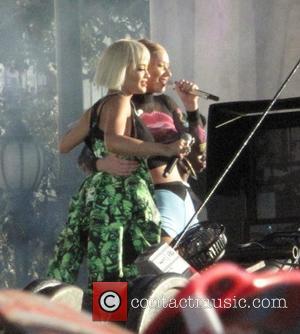 Picture: Iggy Azalea and Rita Ora - Artists are seen hanging out and performing at Budweiser Made In America Festival 2014 held at the Grand Park...

Iggy Azalea turned down the chance to work with Ariana Grande on the singer's first album because she thought the former Victorious star was a child.

The odd couple finally paired up for Grande's hit Problem, but the collaboration could have come earlier if Azalea had done her homework.

At 21, Grande is just three years younger than the Australian rapper - but Azalea insists it seemed like she came from a different generation: "I felt that my music was kind of so risque and I knew she had a Disney show... I didn't feel like it was appropriate (for us to work together) but then I actually met her and I found out that she's a grown-up and I was like, 'Oh, Ok!'"