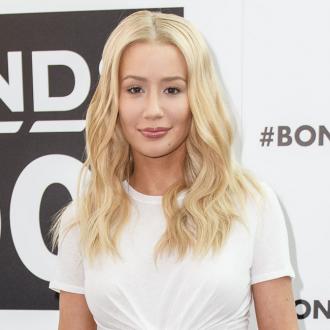 The pair previously collaborated on a remix of the latter's single 'All Hands On Deck' but Iggy has now revealed she's hoping to work with the R&B star again for her upcoming second album.

She teased on Twitter: ''I would like to work with you again too @Tinashe... you're awesome. My album this time? (sic).''

Meanwhile the 25-year-old rapper is racing ahead with the LP and updated her fans on its progress by admitting she's already posed for the cover art.

In another tweet, she added: ''STUFF IS HAPPENING PEOPLE. BRB.

''in addition to the aforementioned ''stuff''... I shot my album cover today and im really excited. (sic).''

And the 'Fancy' hitmaker recently gave an update on the record, which she confessed she's been working on with D.R.U.G.S. - which stands for Dirty Rotten Underground Sound - who produced her 2011 debut mixtape 'Ignorant Art'.

She said: ''I just been doing my whole album with the guys I did my first mixtape with actually, and we're almost finished and it's been super cool working with my whole friends.''