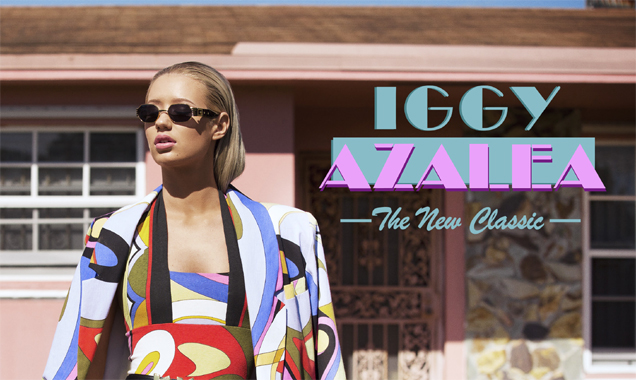 The Australian rap siren has made her mark across the globe since exploding onto the airwaves last year with her killer underground smash, 'Work'. Almost 12 months on, Ms Azalea has proven she's an unstoppable force, from London to Atlanta, Paris to Sydney, Milan to LA, cementing herself as a sure-fire pop sensation with a grand master plan, world domination.

Iggy's truly inspirational story started in Miami at the age of 16 where she grafted hard, day and night to establish herself in the US rap scene.  Iggy exploded onto the underground scene in 2011 with her debut mixtape 'Ignorant Art' which featured controversial track and viral video for 'Pu$$y', which went global. Iggy then went on to release another mixtape, 'Trapgold' which lead to her signing a deal with Virgin EMI Records where she began work on her awaited debut album. Since then Iggy has delivered two top 20 singles, with her previous single 'Change Your Life' ft T.I. hitting the UK top 10.

2013 brought Iggy to the forefront as she became one of Vevo's most successful break-through acts as well as hitting the road to support rap legend Nas and later Beyoncé on their international tour dates.   Iggy's success as a global star is evident with over 1Million followers on Instagram and YouTube views totalling 50Million - incredible statistics for a pre-album artist.

'The New Classic' is an impeccably produced record, driven by beats of epic proportions and laced with Iggy's unmistakable lyrical prowess, her signature double-time flow showcasing a class, intellect and maturity beyond her tender years.  Keeping it in the family, the album features guest vocals from close friends including the likes of Rita Ora, T.I. and dancehall legend, Mavado.  Iggy Azalea also worked with legendary producers Stargate and Timbaland as well as co-writing 'Black Widow' with global superstar, Katy Perry.

Last year Iggy ignited dance floors and festival fields across the UK with performances at Glastonbury, Wireless, Radio 1's Big Weekend, The Great Escape and London's O2 Arena to name a few; this summer will see Iggy return to the festival circuit as she joins the likes of Kanye West, Pharrell Williams and Basement Jaxx at London's Wireless Festival, with further festival appearances to be announced.

Following her biggest performance to date on US prime time TV, 'The Late Show, with David Letterman, Iggy was invited to perform at this year's Grammy Awards Friends 'N' Family party, where she was joined on stage with fellow rapper, T.I. to perform their UK hit single, 'Change Your Life' together.

Pre-order 'The New Classic' on iTunes now to receive 'Impossible Is Nothing' immediately.