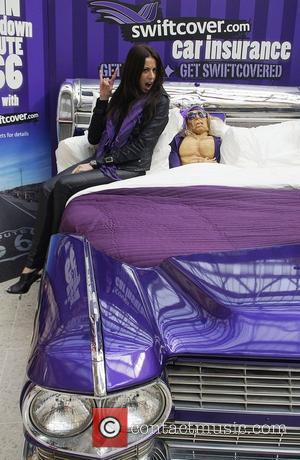 Picture: A model poses with an Iggy Pop puppet for the promotion of swiftcover.com car insurance in London London, England - 28.03.11

Iggy Pop gave a typically wild performance on last night's American Idol. The 63-year-old Iggy And The Stooges front man left 'Idol judge Jennifer Lopez red faced after "gyrating his hips" just inches from her face, reports the UK's Daily Mail.
Iggy Pop showed no signs of toning down his act for the show that usually welcomes pop favourites such as The Black Eyed Peas and Jennifer Hudson as special guests. Performing shirtless, 63-year-old Iggy ripped through a rendition of 'Wild One' and singled out Lopez for special attention. The rocker made his way over to the judges table and danced just inches from the R&B singer. Lopez reacted by "putting her head in her hands" and was "the last judge to her feet to applaud the legendary star after his performance". The amusing scenes came on a shock results night that saw favourite Pia Toscano eliminated from the competition. The 22-year-old New Yorker was kicked off the singing contest after receiving the lowest amount of viewer votes. Reacting to the decision, Lopez said, "I can't believe what just happened here. I'm shocked and angry - I don't know what to say".
Iggy Pop released his last solo album, 'Preliminaires', in 2009. The record was inspired by Michel Houellebecq's novel 'The Possibility of an Island'.