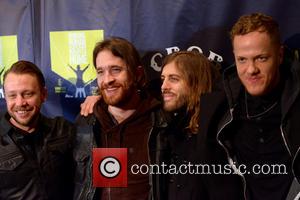 Imagine Dragons have tied Jason Mraz for the longest run on the U.S. pop charts.

The group's Radioactive hit has landed 76 weeks on the Billboard Hot 100, matching Mraz's four-year-old record with I'm Yours.

The track falls out of the top 20 on this week's new countdown following a surge after the band performed the song with Kendrick Lamar at the Grammy Awards and on Saturday Night Live.

Radioactive debuted at 93 in August, 2012, and dropped to 98 the following week before leaving the chart. It returned a month later (Sep12), and has remained on the countdown ever since.

Coincidentally, Awolnation's Sail will become the third track to score 76 weeks on the chart next week. The 2013 anthem currently stands at 41 on the Hot 100.